A Comparative Study of Comprehensiveness of the Quran According to the "Tafsir al-Mizan fi Tafsir al-Quran" and "Rooh al-Ma'ani fi Tafsir al-Quran al-'Adhim"
Ali Ahmad Naseh[1]
Farzad Esfandiyari[2]
Abstract
Comprehensiveness of the Quran is one of the important foundations for its comprehension and interpretation, which has been noticed and considered by old and new commentators. Among the commentators who have seriously raised the issue in their commentaries, we can refer to Allamah Tabatabaii and Alusi Baghdadi. The studies show that although Alusi devotes a special chapter to this issue, he is in a kind of astonishment and fails to free himself from the questions and doubts which come to his mind. That is why we see him moving towards a minimal view in some parts of his commentary and towards a moderate or maximal one in other parts. The review of Allamah's remarks, however, shows that the only acceptable view for the comprehensiveness of Quran is moderate comprehensiveness in his view; he rejects and criticizes the other viewpoints. The present paper comparatively studies the view of these great commentators in this regard.

The Isra'iliyyat (of the Israelites) of the Story of Mary and Jesus (p.b.u.t) in Shia and Sunny Commentaries, with Emphasis on Behar al- Anwar (Seas of Lights)
Seyyedeh Vahideh Rahimi[3]
Faezeh Sadat Khosravi[4]
Abstract
The present research entitled "the Isra'iliyyat of the story of Mary and Jesus (p.b.u.t) in Shia and Sunny commentaries, with emphasis on Behar al-Anwar" was conducted with the aim of extracting the Isra'iliyyat of Behar al-Anwar in narrating the stories of Mary and Jesus. It is mainly aimed at extracting the Isra'iliyyat of these stories and elaborating on how Allamah Majlesi  addressed these narratives and their narrators by studying the text of the Behar al-Anwar, reviewing  Allamah's other works and comparing and contrasting them with Shia and Sunny commentaries. Some scholars, including Allamah Tabatabaii and Allamah Askari, believe that Majlesi had not tried to select valid narratives and differentiate them from weak ones and had only gathered all valid and invalid hadiths in Behar al-Anwar without considering their validity or invalidity in relation to infallible Imams, while the analysis of his "remarks" and  explanations under the aforementioned narratives and comparing them with other commentaries show that general public's conception contradicts with how Majlesi had really addressed these narratives. In other words, it should be said that only few Isra'iliyyat can be found among many related narratives, which are explicitly rejected by Majlesi or can be invalidated on the basis of Majlesi's other criteria for other narratives, because there are many instances of his explicit and clear rejection of Isra'iliyyat and their narrators in all parts of Behar al-Anwar. Therefore, it should be said that Allamah Majlesi had carefully selected the narrations on the basis of his specific criteria and had thus prevented the entrance of many Isra'iliyyat into Behar al-Anwar as a complete collection of hadiths. So, it can be concluded that attention to Isra'iliyyat, their narrators and explicit and clear rejection of such narratives is one of the Majlesi's important criteria for selecting narratives for Behar al-Anwar.


Worship in the View of Fakhr Razi and Allamah Tabatabaii
Ibrahim Noori[7]
Mansour Nikpanah[8]
Abstract
The reason for creating man by God is to worship Him. Accordingly, different commentators, including Imam Fakhr Razi, as one of the great Sunny commentators, and Allamah Tabatabaii, as one of the great Shia commentators, have explained and elaborated on the term "worship". Their views about worship will definitely remove many ambiguities about worship and lead us to right path on the one hand, and will show the proximity and similarity of the views of Muslim scholars from different Islamic schools about the principles and foundations of religion on the other hand. Conducting research on the views of different Muslim scholars can prevent the enemies of Islam and Muslims from making division and schism among Muslims. Using a library method and a comparative outlook, the present paper seeks to compare the views of Imam Fakhr Razi and Allamah Tabatabaii through taking into consideration their commentaries. Generally, the research findings show that these two scholars regard worship as the most important aim of man's creation, with different stages. Contemplating on their words, we can depict and prove the limit of the essence of worship in their views, which shows the claims and fallacies of those who provide wrong and common interpretations of worship are unjustified. The similarity of their views about worship emphasizes the fact that Wahhabis claims about worship contradict with reason and tradition.


[1] Associate professor of department of sciences of the Quran and hadith, Qom University 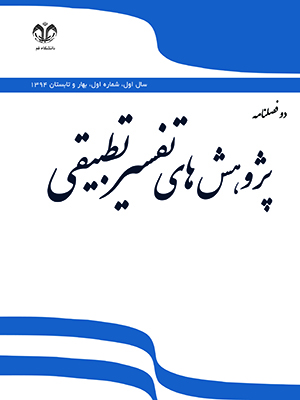